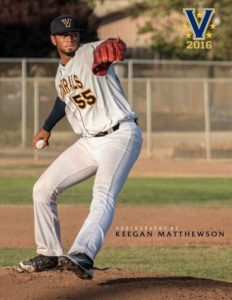 VALLEJO, Calif. – The Vallejo Admirals announced on Thursday that the Los Angeles Angels of Anaheim have purchased the contract of pitcher Kida De La Cruz. De La Cruz was tied for third on the Admirals with 58 strikeouts last season while compiling a 3-4 record in 69 innings.

“This opportunity means my life,” said De La Cruz. “All of the little things that have helped get me to where I am today have led to the big picture of signing with the Angels.”

He becomes the fourth Admirals player to be signed by a Major League affiliate and the second this offseason, as former second baseman Alian Silva was recently signed by the Washington Nationals after an invite to spring training.

De La Cruz was originally drafted by the Washington Nationals in the 28th round of the 2014 MLB Amateur Draft, playing for two seasons with the Gulf Coast League Nationals. Washington released him two weeks before spring training ended in 2016.

“The first time around it was about how hard I threw,” said De La Cruz. “This time, I’ve gone through a lot in my life to get where I am today. I went to Mexico on Sundays just to play baseball in order to get my name out there. I used to work out and part of my routine was trying to throw baseballs through a cinder block wall in my backyard. It’s tough when you don’t have a structured training regimen and it’s very easy to give up.”

De La Cruz first learned that the Angels were interested in him after working out for several organizations last week, including the Angels in Tempe, Ariz. De La Cruz’s signing, though, is one that included both luck and circumstance.

Demetrius Mitchell had met both De La Cruz and his mother at a Frontier League workout in 2016. During a bullpen session workout for the Nationals, Mitchell chatted with Kida’s mother and the two exchanged phone numbers in order to remain in touch. The De La Cruz’s have a New York area code, even though Kida is originally from Miami, FL.

“I was clearing out my phone one day and meant to text a coach, but, by mistake, texted Kida’s mom, asking if there were any players who deserved a look in training camp,” said Mitchell. “Kida’s mom sent me a picture of him in uniform and asked, do you remember him? He had only been pitching for two and a half years, but I decided to take a chance on him at some affiliated camps and workouts, of which included the Angels.”

Mitchell was with De La Cruz when the Angels called, and the first two phone calls the right-hander made were to his mom and dad.

“I said, hey mom, guess what? I’m playing for the Angels,” De La Cruz said. “I got down on my knees and was overjoyed with emotion, as you can imagine. I could hear my family in the background screaming in happiness.”

Experience was what De La Cruz was seeking after Washington released him in 2016. Vallejo played a major role in his opportunity to both grow and advance his career, while gaining valuable experience on the mound.

“I’m fairly new to pitching,” said De La Cruz. “Vallejo was a very good experience for me and being in such a competitive league, helped me gain the chance to face players like Jose Canseco. Those guys know what it takes to succeed at the next level, and having that opportunity last season was huge.”

De La Cruz departs Saturday for the Angels spring training camp and becomes the first Admirals player to sign with an affiliated team twice during his playing career.