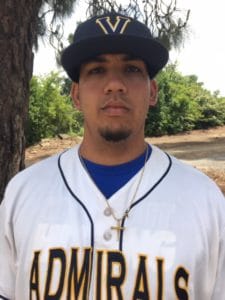 PITTSBURG, Calif. – The Admirals were unable to overcome an early error that led to an unearned run in the first inning that provided momentum for Pittsburg during a 6-0 loss at Winter Chevrolet Stadium on Friday afternoon. Vallejo falls to 3-4 this season while the Diamonds improve to 3-3 overall.

In the bottom of the first inning, Pittsburg took advantage of an error by shortstop Pedro Perez on a ground ball from J.J. Wagner, who advanced Ordomar Valdez to third after he had doubled to lead off the frame. After Vinny Guglietti grounded out, it scored Valdez for a 1-0 lead.

Neither team managed much until the seventh inning, when Pittsburg would push across a run after another error by the Admirals defense, as an RBI triple by Wes Wallace plated Guglietti.

Pittsburg would add four more runs in the eighth inning after a three-run home run by Javier Marticorona and a solo homer by Caleb Bryson that gave the Diamonds a 6-0 lead and chased Admirals starter Brent Adheen from the game. All of which was preceded by an error as well.

The Admirals managed seven hits against Pittsburg starter Tyler Stirewalt and two relievers, but hit into three double-plays that ended any momentum that they were able to garner.

Stirewalt picked up the victory with seven innings of scoreless baseball with six strikeouts. He improves to 1-1 this season after allowing the Admirals only three hits.

Adheen suffered the loss after striking out four and allowing six runs – only two of them earned – to fall to 1-1 this season.

Admirals third baseman Gerald Bautista continued his scorching start to the season with two more hits, while Perez went 2-for-3 in the loss. Chevy Clarke reached base three more times with a single and a pair of walks and Nick Akins singled and walked to extend his hitting streak to five games.

The Admirals and Diamonds are back in action tomorrow night for the second game of the series at 5 p.m. from Winter Chevrolet Stadium in Pittsburg. Marc Rutledge is slated to take the hill for Vallejo. The pregame begins at 4:45 p.m. with Tim Fitzgerald and Dave Grant on the Admirals Baseball Network. Check www.vallejoadmirals.com for broadcast information.

NOTES: For the third time in four games, the Admirals fell behind early and lost … Adheen walked only one batter, after the starters in the Sonoma series for Vallejo walked six or more in three consecutive games, but it was errors that cost the Admirals on Friday … the Admirals managed only three hits against Pittsburg starter Tyler Stirewalt – a single by Clarke in the first, a single by Bautista in the second and a single by Perez in the sixth – as Pittsburg’s defense turned three double plays that crushed Vallejo’s momentum.