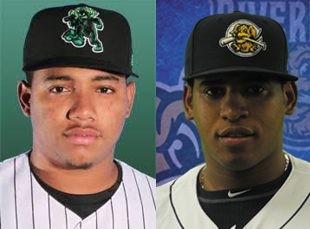 Hoping to build the backbone of another strong pitching staff this year, Vallejo Admirals Professional baseball announces the dual signings of Dominican pitchers Andin Diaz and Daris Vargas for the 2018 season. Diaz, a former Chicago Cubs farmhand, returns to Vallejo after his major contributions to the 2017 Pacific Association champions. Vargas comes to the ballclub from the New York Yankees chain.

Diaz is fondly remembered by Admirals fans for earning the save in the 2017 Pacific Association championship game. His 2 2/3 scoreless innings against Sonoma capped off a successful 12-game run, wherein he notched a 3.26 ERA and a 1-0 won-loss record in 19 1/3 innings of work. In the Cubs system, Diaz had ascended as high as Short-Season Class-A Eugene of the Northwest League. He hails from the northern coastal town of Nagua in the Dominican Republic.

A starter throughout his time in the Yankees system, Vargas had reached the full-season Class-A level with Charleston of the South Atlantic League. He posted strong numbers with both Charleston and the Yankees West squad of the Gulf Coast League. Vargas is from the southern coastal city of Azua, 70 miles west of Santo Domingo, the Dominican capital.