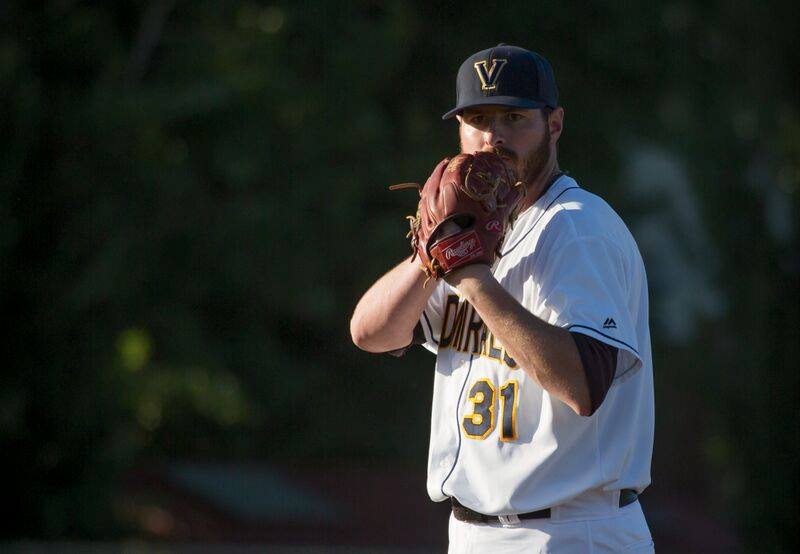 PITTSBURG, Calif. – The Admirals took a 2-0 lead in the first after a two-run home run by Tillman Pugh and starter David Dinelli (pictured) allowed only two hits in his five innings as Vallejo won its season-high fifth straight game, 6-3 over the Diamonds at Winter Chevrolet Stadium. For Dinelli, he passed Nick Flory (2013-15) to become the franchise’s all-time leader with 13 career victories.

Vallejo improved to 9-8 in the second half of Pacific Association action and 21-35 overall and Pittsburg fell to 7-10 and 28-28 overall.

Dinelli (2-4) worked five innings and took a no-hitter into the fourth inning, finishing with one strikeout and two walks on only two hits and allowed three earned runs to collect his second win of the season. Pittsburg starter Michael Gunn allowed eight hits and five earned runs with four strikeouts and fell for the first time this season against the Admirals after starting 3-0.

Tillman Pugh hit his second two-run home run in as many nights in the first inning, driving in David Kiriakos for a 2-0 Admirals lead after one.

Vallejo added to its lead in the third after Pugh grounded into a double play that scored Quintin Rohrbaugh, who led off the inning with a double, and a single from Mike Blanke that brought in Chevy Clarke.

With the Admirals leading 4-0, Pittsburg connected for three runs in the fourth after a wild pitch from Dinelli scored Ordomar Valdez, a double from Yiecok Calderon plated B.J. Guinn and a sacrifice fly from Gerald Bautista scored Wes Wallace. Pittsburg had been held to one run through the first 12 innings to open the series prior to the three-run fourth inning.

In the sixth, Shawn Payne hit a one-out, solo home run to right field – his third homer of the season against Pittsburg – to give the Admirals some breathing room, 5-3.

Admirals reliever Brent Adheen retired all four Pittsburg hitters he faced after replacing Dinelli in the sixth. It was the fourth consecutive scoreless outing for Adheen since joining the bullpen on July 27.

Alex Fishberg took over for Adheen with one out in the seventh and struck out Pittsburg catcher Alex McKeon looking to end the inning.

Admirals catcher Mike Blanke hit a solo home run in the eighth to extend the Vallejo lead to 6-3. It was Blanke’s first homer as an Admiral this season.

Admirals reliever Andin Diaz took over for Fishberg to open the bottom of the eighth and allowed a two-out single to Vinny Guglietti that brought home Ordomar Valdez and trimmed the Admirals lead to 6-4. Diaz got Wallace to fly out to right to end the inning with a two-run advantage.

In the ninth, Sammy Gervacio struck out Bautista and Javier Marticorona to collect his Pacific Association-leading 11th save of the year and preserve the 6-4 victory.

Vallejo and Pittsburg play the final game of the series at 1 p.m. PT Sunday from Winter Chevrolet Stadium in Pittsburg. The Team Superstores Pregame Show begins at 12:45 p.m. with Tim Fitzgerald and Daniel Barrera on the Admirals Broadcast Network.

NOTES: The Admirals five-game win streak is the longest since July 24-31, 2016 (when Vallejo won seven in a row) … Kiriakos extended his on-base streak to 16 games after a single in the first … Pugh took over the team lead with his 11th home run of the season in the first – Akins, Sr. had led the team for most of the season until tonight … Payne has hit all three of his home runs this season against Pittsburg at Winter Chevrolet Stadium (July 25 and June 23 prior to tonight) …. Rohrbaugh collected his third multi-hit game over his first 11 as a professional … Pugh extended his on-base streak to 12 games and hit streak to eight.