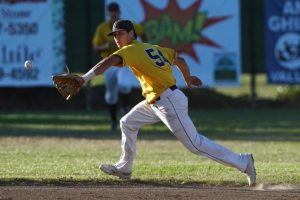 Matt Eureste hit a grand slam for the Admirals in the sixth.

Vijay Patel, a Maria Carrillo High School-Santa Rosa product, didn’t allow a hit in five innings of work. Patel did walk in a run. Vallejo got its first hit of the night in the sixth against Willie Ethington.

Sonoma pounded out 12 hits against five Admirals pitchers. Mike Melendez took the loss to fall to 4-3 on the year. Melendez allowed six runs (four earned) on seven hits in four innings of work.

Patel allowed one earned run with two strikeouts and six walks to improve to 4-1.

Sonoma raced to a 10-0 lead and led 11-1 entering the bottom of the sixth. Chevy Clarke got an infield single for the Admirals first hit. Wilkyns Jimenez doubled in a run but Clarke was thrown out trying to score. After two more walks, Eureste hit his fifth home run of the season to right for a grand slam to cut the lead to 11-6.

However, the Stompers got three in the eighth to put the game away.

The Admirals continue their five-game homestand on Saturday with Salina coming in for a 1:05 p.m. game. For more information, go to vallejoadmirals.com or call 707-641-1111.