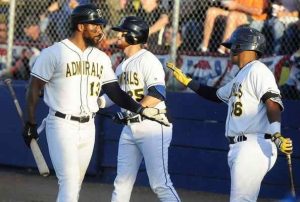 As far as the Diamonds were concerned, Admirals catcher Cyle Figueroa played the part of Jason Vorhees, the mythical, hockey-mask wielding psycho who refuses to die.

Figueroa’s walkoff, two-run single in the bottom of the ninth drove home the tying and winning runs as the Admirals escaped with a wild 10-9 win to conclude the two-game, Pacific Association sweep at Wilson Park.

Figueroa had successfully kept an inning alive in the third inning with an opposite-field single. He went that way again in the ninth with a poke that landed about a foot from the foul line in right field.

“That’s my game plan almost every time; I’m an opposite-field hitter,” said Figueroa, who was 3-for-5. “I try to get the ball deep and hit it the other way. That’s really my approach — middle and the other way.”

Kiriakos led off the inning by legging out an infield single and Clarke walked on a very close 3 and 2 pitch. Vladimir Gomez had a key at-bat as he laid down a bunt on an 0 and 2 pitch to advance both runners to second and third.

“We work on that kind of stuff in batting practice,” Gomez said about bunting with two strikes. “I felt pretty confident and felt like I could get it done.”

With one out, Diamonds manager Aaron Miles elected to walk Brandon Fischer to load the bases. On the first pitch, Figueroa sent the home fans home happy.

The game looked like it could be a nightmare for the Admirals as starting pitcher Luis Ramirez surrendered a two-run homer to Pat O’Donnell to start the game and then Pittsburg proceeded to load the bases with no outs.

Ramirez left the game with an injury but reliever Eli Garcia struck out Wes Wallace and induced a ground ball double play from Stephan Havia — similar to the accomplishment that Giants reliever Reyes Moronta pulled against the A’s in the Bay Bridge Series opener at AT&T Park.

“I came with the mentality that I was ready to go, to throw some ground balls and get a double play,” Garcia said. “At that point, I’m not worried about losing because it’s the beginning of the game and there’s a lot of time to go.”

Diamonds shortstop Jose Garcia was 2-for-2 against his younger brother Eli.

“I faced him for the first time last year in the same situation,” Eli Garcia said. “It’s a crazy feeling. In that situation, he’s not really my brother though. He’s the competition. I was a little mad that he got a couple of hits off me.”

Vallejo (23-15) sent 10 batters to the plate in the third inning and scored five times to take a 7-3 lead against starting pitcher Dakota Freese. The Admirals trailed 3-2 before the breakout inning.

Nick Akins Sr. led the inning off with a single, Clarke was hit with a pitch and Gomez doubled down the first-base line to score Akins and tie the game 3-3. Fischer followed with a double to center to score Clarke and give the Admirals a 4-3 edge.

Figueroa threw the bat head at a Freese pitch with two strikes for an RBI single to knock in Gomez. Freese walked Chris Fornaci to load the bases, but got Brandon Pugh to fly out for the second out. Freese, however, walked Kiniry to force in a run and then wild-pitched Figueroa in for the 7-3 Vallejo lead.

The Diamonds then tied and took the lead at 8-7 with four runs in the sixth against reliever Tim Holmes. Rafael Valera tied the game with a two-run double and Gabriel Bracamonte drove in the go-ahead run with an RBI single.

The Admirals tied it 8-8 in the sixth when Kiriakos hit a rocket double off the wall in left field to score Kiniry. Kiriakos was 3-for-5 and knocked in two.

However, Pittsburg scored the go-ahead run in the eighth against reliever Peter Reyes as Bracamonte’s sacrifice fly scored O’Donnell, who singled to lead off the inning. O’Donnell was 4-for-4 and reached base five times.

Brett Schneider (2-0) pitched a perfect top of the ninth inning to earn the win.

Notes: Vallejo scored in a strange way in the second inning as Fornaci reached on an infield single with two outs on a play where Pittsburg shortstop Jose Garcia ran into umpire Roy Hammond. On the very next play, Garcia misplayed Pugh’s ground ball as Vallejo scored the run. … The Admirals travel to San Rafael on Saturday and Sunday. It will be their first trip to Albert Field this year.