Fornaci Makes Noise with Glove and with Bat 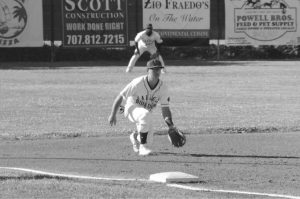 The No. 9 hitter in a baseball lineup is historically considered the worst of the nine.

However, as baseball evolves and changes, tradition is set aside for experimentation. Some managers in the big leagues have chosen to hit their pitchers eighth and a position player ninth and some college coaches have opted for a speedster in the No. 9 slot to give their program a double-leadoff threat.

That’s youngster Chris Fornaci, 24, who joined the Admirals last season in the middle of the championship push and helped solidify the team’s infield defense.

Fornaci is from nearby Walnut Creek and graduated from De La Salle High in Concord. He initially was a free safety and wide receiver on the football team but eventually decided to concentrate on baseball exclusively.

Fornaci said he never hit for much power in high school.

“It wasn’t until my sophomore year at Pepperdine that I started driving the ball,” Fornaci said. “My sophomore year there I moved up to a 34-inch bat and I think it was just an accumulation of being more mature physically and mentally and also getting your pitch and not missing.”

Fornaci was a recruited walk-on at Pepperdine. The Waves won the West Coast Conference twice during his tenure. In 2014, they won the Cal Poly Regional and then were three outs away from getting to the College World Series in the TCU Super Regional before being eliminated.

Two years later after his senior year, Fornaci thought he had a shot to get drafted by a Major League Baseball organization but the draft came and went.

“You have scouts telling you that you’re going to get drafted and you go to pre-draft workouts but it’s still a crap-shoot until you hear your name called,” he said.

Fornaci could not find a professional baseball job in 2016 but in 2017, he opted for the Southern Illinois Miners of the independent Frontier League. Unfortunately, he did not pick up a hit in 21 at-bats and was released.

“I was there all of spring training and then the first month of the season and that’s when I got those 21 at-bats,” he said. “Especially with a full year of not playing, I just had no rhythm and I couldn’t get into a rhythm. Honestly, it was kind of a blessing. I was kind of waiting to get released. I wanted to go to a place where I could play.”

Fornaci began sending emails around to other professional teams. Phillips said he happened to check his email one day and thought Fornaci would be worth a look.

“Just from looking at the email, it seemed like he could play for me and I gave him a shot and he’s taken advantage of it,” Phillips said.

Fornaci said Phillips as well as outfielders Tillman Pugh and Nick Akins Sr. had a big impact on him after he came aboard. Pugh graduated from De La Salle as well but the two did not know one another.

“We were really struggling at the time but it was pretty obvious with those guys around, I didn’t see (the losing) lasting and it didn’t,” Fornaci said. “That was a testament to them.”

Fornaci hit a huge home run in the Pacific Association championship game win against Sonoma and was rewarded with the league’s Defensive Player of the Year for third basemen after the season.

Fornaci said he was a second baseman up until his junior year at Pepperdine. He said he was a poor defender that season since he had never played the position.

During the fall of his senior year he worked with ex-Pepperdine shortstop Zach Vincej, who went on to play in the Cincinnati Reds and Seattle Mariners organizations.

“With those small details, he really helped,” Fornaci said. “I felt like the fundamentals were there since club ball.”

Fornaci acknowledged that some of the fields in the Pacific Association can be a challenge.

“I enjoy playing on the dirt fields and I think some of these fields get a pretty bad rap,” he said. “I do enjoy it because it helps me with that first step and going through the ball and allowing your glove to work. It only makes it easier when you move on to a better field.”

Fornaci might be well known around the Pacific Association for “taking one for the team,” or hit by pitches. He was first in that category last season despite playing in only 56 games and is second this season with 13. (Napa’s Jordan Anderson has 14). Fornaci said the thought of not always moving out of the way of a pitch started at Pepperdine and carried over to the Admirals. He owns the Waves’ single-season record for getting hit with 24 during his junior year.

Still, he noted it’s something he doesn’t necessarily want to be known for.

“I’ve tried to get better as far as getting out of the way because you want to hit … I want to hit,” he said.

Phillips mentioned that Fornaci has the age and tools to get picked up by an affiliated club. That’s what Fornaci wants … and then some.