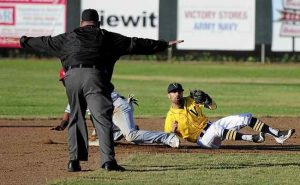 When an offense is scuffling, some managers will try to force an opponent’s hand.

P.J. Phillips is one of those managers.

The Vallejo Admirals found creative ways to score on Thursday in the opener of a Pacific Association series at Wilson Park and beat the expansion Napa Silverados 8-3 in the first-ever meeting between the two clubs.

Vallejo snapped a mini two-game losing skid and ended a streak of 20 straight scoreless innings in the process.

Down 3-0, the Admirals rallied to take the lead for good after a three-run sixth. Vallejo took advantage of 10 Napa walks and the Admirals’ bullpen pitched three scoreless innings to end the night.

“In Pittsburg, we were swinging at some bad pitches so today, the game plan was to make them throw strikes,” Phillips said. “We were trying to get runners on and steal bases, try to finesse some runs.”

Thursday marked the return of Tito Fuentes Jr., the former Admirals general manager and field manager. Fuentes is now Napa’s field general and he has the expansion team within striking distance of first place early in the season. Napa leads the Pacific Association in steals by a wide margin and the Silverados stole two more on Thursday.

“I am an old-school baseball guy and I really liked the 1980s (St. Louis) Cardinals,” Fuentes said. “I wanted a little bit of power and a little bit of speed and good defense and I think that’s what baseball is all about.”

The Admirals were stifled by Napa starting pitcher Scott Harkin for five innings but broke through against Napa relievers Mitchell Gonsalves and losing pitcher Chris Butcher to lead 4-3 in the sixth. Vallejo had just one hit in the three-run inning, a bunt single from Brandon Fischer. An error scored Graylin Derke, a groundout from Rian Kiniry scored Vladimir Gomez and a fielder’s choice ground ball from David Kiriakos scored Fischer.

Kiniry was 1-for-3, knocked in two runs and was on base twice. He made it 3-1 in the third inning with a sacrifice fly.

“We just wanted to see more pitches and not do too much,” Kiniry said. “We were getting ourselves out a lot in Pittsburg.”

Napa (7-6) grabbed a 1-0 lead in the first inning as Bernardi walked Nick Gatta to start the game and Gatta promptly stole second, moved to third on a ground ball from Ryan Jones and scored on Nick Kern’s broken-bat single to center.

The Silverados tacked on two more in the third when Bernardi walked DeAndre Asbury-Heath and Dominic Bethancourt singled. After one out, Jones singled off Kiriakos’ glove at shortstop to score both runners.

The Admirals (9-4) finally got to Harkin in the third when Cycle Figueroa singled to right on a ball that Jordan Anderson, the right fielder, might have misplayed in the sun. Figueroa reached second on Chris Fornaci’s walk, third on a wild pitch and scored on Kiniry’s sacrifice fly to right. This time, Anderson made a diving catch to rob Kiniry of a single.

The Admirals had a chance to tie or take the lead against Harkin in the fifth when they loaded the bases with two outs. But Harkin struck out dAundray Van Slyke to end the threat.

Harkin’s pitch count reached 90 after the fifth and Fuentes turned to his bullpen.

“There were probably about 20-25 pitches not called strikes,” Fuentes said. “If he comes out of the fifth with about 60-65 pitches, maybe he goes another inning or an inning and a half.”

Derke returned to the lineup after missing games against the Diamonds on Tuesday and Wednesday. He was hit in the head with an errant ball prior to the first game in Pittsburg and as a precaution, the Admirals held him out of the lineup for two games. Derke was 2-for-3 with two RBIs against Napa as his two-run single in the eighth concluded a three-run insurance inning.

Phillips was missing not only Derke but defending league MVP Tillman Pugh for the Diamonds’ series. Pugh signed with the Ottawa Champions of the Can-Am League last weekend.

Phillips noted that Napa is going to be a tough team to combat on the bases. The Admirals did a good job, throwing out three Silverados total.

“They’re a scrappy team,” he said. “They can sneak up on you and beat you without you even paying attention. You just have to throw strikes, throw the fastball and try to keep them off the bases.”

Notes: Vallejo boxer Ryan Bourland threw out the ceremonial first pitch. … The Admirals have a rare three-game homestand this week with two against Napa and one against Martinez. … Neither team seemed thrilled with the strike zone but Napa pitchers were warned twice after they reacted when close pitches were called balls. When a balk was called on reliever Bryan Ozuna in the seventh, the home plate umpire warned Fuentes in the dugout. … Admiral relievers Brett Schneider, Jalen Miller and Peter Reyes combined to allow just one hit over the final three innings.