In Sonoma, Admirals Win 5-4 on the Fourth 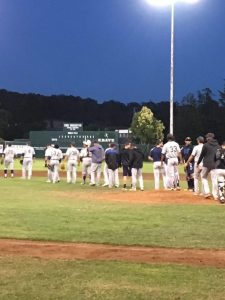 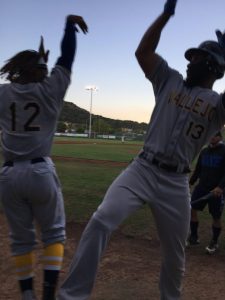 SONOMA, CALIF. – Nick Akins Sr. hit his 15th home run to match his 2017 total, Brandon Fischer doubled to bring in Vlad Gomez with the winning run in the ninth, and Alex Fishberg earned the relief victory in a 5-4 Vallejo Admirals win over the hosting Sonoma Stompers. The spirited Independence Day contest at Palooka Park also featured a solid six-inning start from Vallejo’s Jalen Miller Sr., who took a no-decision.

The Stompers scored first in their third turn at bat, when Rob DeAngelis drove in Kevin Farley with a double. In the fifth, Tillman Pugh gave the Admirals a 3-1 lead with a three-run homer to complete a two-out, bases-empty rally. Against Sonoma starter Dominic Topoozian, who lasted eight innings tonight, Cyle Figueroa singled and Chris Fornaci walked to set the table for Pugh, who clubbed his third homer of the year.

Akins’ solo shot in the eighth off Topoozian upped the Admirals’ lead to 4-1, but it wouldn’t last. Cage Cascone had relieved Miller in the seventh, and he only lasted one out into the Sonoma eighth. Kenny Meimersdorf’s RBI single and Miles Williams’ two-run-scoring hit tied the score at 4 and knocked Cascone out of the game. Fishberg then held the line with a clutch strikeout of Farley to keep the score tied.

In the ninth, Ryan Richardson relieved Topoozian, and Gomez led off with a single. He then stole second base, which proved crucial to the outcome. With one out, Fischer belted a long drive into the wide-open spaces of center field, and Marcus Bradley almost caught Fischer’s liner underneath Arnold Field’s football goalposts. Bradley couldn’t come up with it, and Gomez steamed home from second ahead of the relay throw. In the bottom half, Daniel Comstock singled with two out, but Fishberg struck out Meimersdorf to secure the victory, minutes before the “fireworks curfew” would have halted the game.

Akins is now in second place on Vallejo’s single-season home-run leader list, tied with his own 2017 mark, and three away from Pugh’s record of 18 from last year. Having pulled back into second place ahead of Sonoma, the Admirals now face the white-hot San Rafael Pacifics, winners of 12 straight and holders of first place by five games over Vallejo. The two-game set between the Admirals and the Pacifics is the first half of a four-game homestand at Wilson Park.

During the game, the Admirals announced two signings. Outfielder Chevy Clarke, the one-time first-round draft pick of the Angels and an everyday performer on last year’s pennant-winning club, is set to return. Joining him is pitcher Alex Dandridge, a North Carolina Central product who recently has played in the Pecos League.