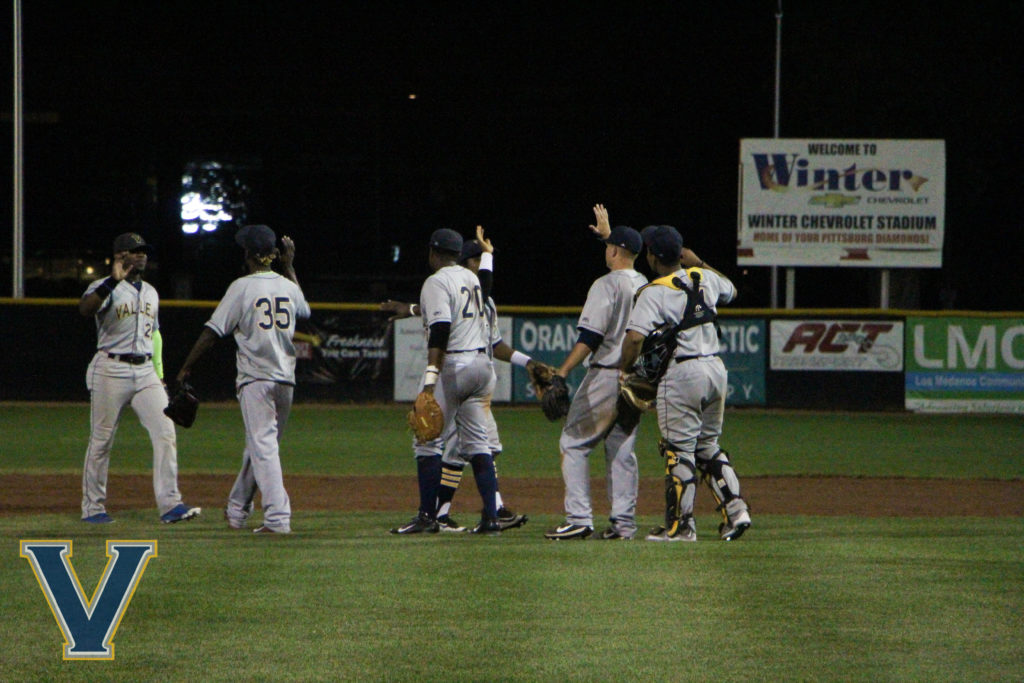 PITTSBURG, Calif. – The Admirals jumped out in front early on Wednesday night, scoring twice in the first and once in the second and third and held on for a 4-2 victory over Pittsburg at Winter Chevrolet Stadium. Admirals starter Mahlik Jones earned his first win as a starter after five innings and only one run allowed with three strikeouts and five hits allowed.

Vallejo improved to 14-33 overall and 2-6 in the second half of Pacific Association play, while Pittsburg fell to 24-23 and 3-5. The Admirals improve to 11-1 this season when leading after eight innings.

Vallejo added to their lead in the second after Kiriakos drove home Deybi Garcia with a single. The Admirals went up 4-0 in the third after an RBI from Vladimir Gomez that plated Shawn Payne, who has opened the frame with a double. Kiriakos finished 3-for-4 and has collected seven hits over his past 10 at-bats against the Diamonds.

Admirals starter Jones (2-1) shut out the Diamonds through his first four innings and finished with three strikeouts and two walks, allowing one earned run on five hits in his first victory as a starter at the professional level.

Pittsburg scored once in the fifth after an RBI double from Jose Garcia brought home Gerald Bautista. In the seventh, Yiecok Calderon doubled to the gap in left-center field and was pushed to third after a deep fly-out by Bautista. Admirals reliever Tim Holmes got both J.J. Wagner and Chad Highberger to strike out swinging as Calderon was stranded at third.

In the eighth, Admirals reliever Roman Gomez walked Garcia to lead off the frame and Garcia went to second on a groundout by Ordomar Valdez and came in to score after a single to center from B.J. Guinn. With the tying run at the plate in the form of Vinny Guglietti and Demetrius Banks replaced Gomez.

Sammy Gervacio struck out pinch-hitter Javier Marticorona in the ninth to collect his eighth save of the season and snap a season-long six game losing streak.

The series finale is set for 6:30 p.m. PT Thursday from Winter Chevrolet Stadium in Pittsburg. The Team Superstores pregame show begins at 6:15 p.m. with Dave Grant and Tim Fitzgerald on the Admirals Baseball Network. Be sure to follow the Admirals on social media, including Twitter (@VallejoAdmirals).

NOTES: Kiriakos has now gone 7-for-his-last-10 overall after tonight’s 3-for-4 effort (two singles, double) … Pugh collected two more hits tonight and now has six multi-hit games over his last 11 … Pugh has also scored 10 times over his past 11 games … after his double in the third, Payne has hit safely in his last four games overall … Vallejo won for just the sixth time in 17 tries against the Diamonds … after 27 runs of support over his three starts against the Admirals in ’17, Pittsburg starter Tyler Stirewalt got just one run over his seven innings and lost for the first time to Vallejo this season.