Kevin Reilly plans to be back as Vallejo Admirals owner 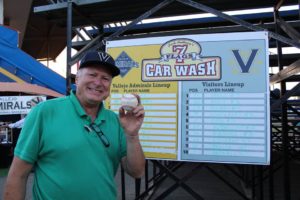 The Vallejo Admirals have had a new owner at the start of every one of their four seasons in the Pacific Association of Professional Baseball Clubs.

Reilly said he expects to return to own the independent league baseball team for the 2017 season even though he lost money this year.

“It’s a lot to learn in one year,” he said shortly after the season finale on Sunday at Wilson Park. “We had a lot of great support. It took a little while for people to know what it was going to be. There were some growing pains in knowing how to do this. This is my first time operating this business. We think we finished up well. We learned a lot about baseball.”

Reilly was a “silent partner” to owner Kathy Beistel in 2015 but she sold her share to him shortly after the 2015 season.

The Admirals finished in last place for the second straight year with a 32-46 record, but a seven-game improvement from 2015.

Reilly made one of the biggest decisions of the year on July 1, announcing that field manager Mike Samuels and his entire coaching staff were being let go. Instead, he turned to player-manager P.J. Phillips to manage the club with pitcher Roman Gomez serving as pitching coach and Kenneth Owen taking over as an assistant coach.

“They inherited a team that still had to clear up some baggage,” Reilly said. “The tone of the team immediately changed. After the smoke cleared, they had a seven-game winning streak.”

The team appeared to play more cohesively under Phillips although the numbers might say otherwise. The team was 11-16 under Samuels and 21-30 the rest of the way under Phillips.

“There have been a lot of ups and downs this season,” catcher Cyle Figueroa said. “Ever since P.J. took over, it’s just been a whole different ballgame. I think the biggest thing was we came together as a team in the second half and you saw us play better baseball.”

Reilly wasn’t sure if Phillips would be back as manager but he praised his abilities this season.

Reilly said attendance was up this season, particularly over the second half of the year.

“Our attendance is up over 50 percent this year but it didn’t start out that way,” Reilly said. “It built up to that. There was a certain amount of ‘let’s wait and see with this new guy,’ but then the word got out.”

On pointstreak.com, it lists the Admirals finishing third in the league in attendance with 5,712 fans for 39 games, an average of 146 per game.

The same website lists the Admirals’ 2015 attendance as 6,776, an average of 174. However, a number of home games on Tuesdays were free during that season.

Tim Fitzgerald, director of broadcasting and media relations, said the attendance figures for 2015 were not always accurate.

“We weren’t as meticulous with the count last year,” he said. “We would just make estimates based on expected attendance.”

Reilly mentioned that the team increased its exposure in the community and has strong communication links through venues like Ozcat Radio and Facebook. He mentioned on-field announcer Chris Owens as helping improve the between-inning entertainment as well.

As far as making money or even coming close to breaking even, Reilly laughed and said, “Not even close. That’s a next year aspiration.”

He did say that it’s his goal for the team to turn a profit next season.

“There’s so much that happens in an offseason but it was our goal this year to make this a rational enterprise, that is a media entertainment organization, not a charity because people like it,” he said.

The Pacific Association fielded just four teams for the third straight season. Mike Shapiro, the president and general manager of the San Rafael Pacifics, said owners are expected to meet in a few weeks to discuss future plans, including possible expansion.

Reilly said the league would like to expand to six teams but it has to find two viable franchises to join.

“You have to persuade someone to think that this is a rational idea or maybe even fool them,” Reilly said, while laughing. “It’s a lot of fun when you are involved in this, but it’s an enormous amount of work.”