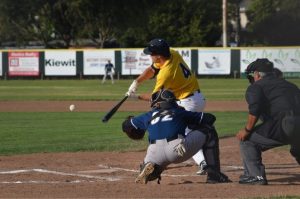 No at-bats, home runs, runs scored or RBIs. Not even an error or a strikeout.

After a 2013 season with the Long Island Ducks he went home to Florida and laid concrete with his father. At some point his dad asked him if he’d ever go back to baseball and he was open to the idea. That’s when fate interviewed.

The Vallejo Admirals needed an infielder this spring after Quintin Rohrbaugh was not able to return. Kiniry called manager P.J. Phillips, his former teammate in the Los Angeles Angels’ organization and asked him if he could “ever use a guy like me?”

The answer: Kiniry has been about as useful as a fire starter on the Discovery Channel show “Naked and Afraid.”

Heading into Pacific Association play on Friday, Kiniry has a .384 on-base percentage, an OPS of .955 with 13 homers, 42 runs scored and 31 RBIs. He leads the league in runs scored and is tied for second in homers with teammate Chris Fornaci.

“He was a good teammate, then and now,” Phillips said. “He was a hard worker. He always plays hard.”

Kiniry, 31, said Phillips was a “great teammate” during their time together with the Rancho Cucamonga Quakes, a single-A affiliate with the Angels in the California League. At the time, Kiniry was in the outfield and Phillips was playing second base.

He was drafted by the Angels twice, the first time after his senior year in high school and then after his sophomore season at Broward Community College in 2006. Despite eventually getting his release, Kiniry enjoyed his time in the Angels’ organization.

“It was great,” he said. “They taught me a lot about the game and it was a great experience overall.”

Kiniry said he was teammates with current big leaguers like Garrett Richards, Kole Calhoun and one of the best players in the game in Mike Trout.

“He was a special player (back then),” Kiniry said of Trout. “You could just tell that he was better than everybody else.”

Kiniry was a solid player in the Angels organization himself and he even hit .302 in 41 games with Triple-A Salt Lake in 2011 but he never hit for much power. He hit just nine long balls in 457 minor league games.

In 2018, however, Kiniry has developed into one of the Pacific Association’s top power threats as he has launched 13 homers in 37 games for Vallejo, including one Thursday night against Pittsburg.

“I made a little bit of a change in my swing,” he said. “Having time and not playing for a few years, I realized there might have been a few things I wasn’t doing as well as I could have been.”

Splitting time between second base and first base, he has just four errors.

When Graylin Derke signed with the Wichita Wingnuts in the American Association in late June, Kiniry moved from second base to first and rookie Brandon Fischer has taken over at second. It is the first time in Kiniry’s career he played the position but Phillips figured he could handle it.

“He looks like a natural to me,” Phillips said. “If you can play the middle infield, you can play first base. That’s how I feel about it.”

Kiniry said there are certain adjustments he’s had to make, notably that he is always moving as a first baseman, whether it’s cutting down the line on a relay or moving in to cover a bunt.

“There are certain things you kind of know just from playing and then you ask guys who have played there, managers and just guys who have more experience and learn the tricks of the trade,” he said.

With Kiniry’s new-found power stroke, first base might be the more appropriate spot anyway.