VALLEJO, Calif. – Montrell Marshall and Ricky Gingras came through with huge bases loaded hits to key a five-run inning and lead the Vallejo Admirals to a 7-5 win over Salina on Wednesday at Wilson Park.

Vallejo trailed the Stockade, 4-1, when the Admirals came to bat in the bottom of the fifth. Chris Fornaci hit a leadoff double and a one-out walk and hit by pitch loaded the bases for Marshall. He ripped a ball inside third and down the line for a two-run double to cut the deficit to 4-3.

Later in the inning, the Admirals loaded the bases again. This time, Gingras hit a double to the fence in right-center field, clearing the bases for a 6-4 lead.

Jesse Remington (2-3) got the win, going six innings and allowing four runs (all earned) on six hits with four strikeouts and four walks. John LaRossa came on and pitched the final three innings for his first save of the year, striking out the first six hitters he faced and finishing with eight strikeouts.

Matt Eureste hit a solo home run for Vallejo. Fornaci extended his streak of reaching base to eight games since coming off of the Inactive List.

Vallejo travels to San Rafael on Thursday for a 6:30 p.m. game. The Admirals return home on Friday to face first place Sonoma at Wilson Park. First pitch is scheduled for 6:35. For more information, go to vallejoadmirals.com or call 707-641-1111. 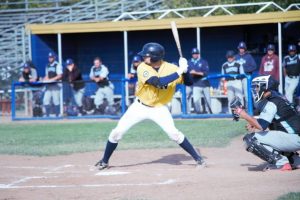