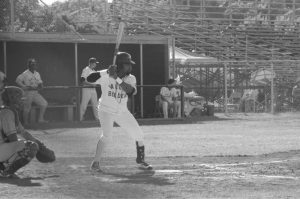 VALLEJO, CALIF. – On “Turn Back the Clock Night,” the Admirals and Silverados donned uniforms reminiscent of their forebearers. The Admirals wore “Vallejo Builders” on their chests, while the visitors’ jersey tops read “Napa Rough Riders.” Napa scored six times in in the top of the first and that was that, as the Silverados cruised to a 13-6 victory at Wilson Park. The Napa win cost the Admirals an opportunity to gain a game on the first-place San Rafael Pacifics, who lost at Pittsburg.

From the 3-spot, Silverados third baseman Josh Montelongo homered and totaled four hits, and cleanup man Nicco Toni hit safely thrice and also went deep. Working with a big lead all night, Billy Felo carried on into the seventh, lasting 6 2/3 innings and allowing three earnies to pick up the victory.

Making his first appearance in nearly a month, Vallejo starter Harold Myles failed to retire any of the six batters he faced and took the loss. Tillman Pugh had banged his head on the center-field wall in Friday night’s game, but he returned on Saturday and tallied a couple of hits and a base on balls as Vallejo’s designated hitter.