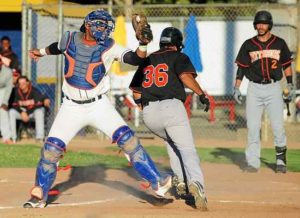 A day after spending Monday enjoying the roller coasters at Six Flags Discovery Kingdom, it was the Vallejo Admirals’ offense that was caught in a loop on Tuesday night.

For the second straight game Vallejo struggled to put runs and hits on the scoreboard as Pittsburg Diamonds starting pitcher Justin Lawrence had Vallejo in fits all game with seven strong innings on the way to a 3-1 victory at Wilson Park.

Lawrence gave up just three hits, including just one after the first inning in his series-opening win on Tuesday. He also struck out four batters.

“I thought we helped him out a lot,” player/manager P.J. Phillips said about Lawrence. “We were swinging at bad pitches early and late in counts. He’s a good pitcher with good stuff but we had a bad approach tonight. In the end you have to tip your hat to him.”

Although Lawrence pitched well, the Admirals had him on the ropes in the first inning.

Vallejo (16-27, 1-3 in the second half) took a 1-0 lead when Gadiel Baez walked, Darian Sandford had a picture-perfect push bunt and Gerald Bautista had a two-out RBI single to center.

“I was just looking for something to drive,” Bautista said. “He (Lawrence) was throwing a splitter and slider and I was trying to hit something hard up the middle.”

The Diamonds (21-22, 2-2 in the second half) tied up the score 1-1 in the top of the third when John Contreras had a two-out single and later scored on a double to right-center by Thomas Shull.

The Admirals minimized the damage when Bautista made a Brooks Robinson-type stellar play on a grounder down the line at third to throw out David Kiriokos and end the inning.

“At that point in the game there was a runner on second and I just threw a fastball and let the defense go to work,” Admirals starting pitcher Kida De La Cruz said. “I’ve seen Bautista make great plays like that in practice all the time. In fact I’m usually the one hitting him the grounders. On that particular play, it wasn’t a matter of whether he was going to catch it or not, but whether or not he would make it look routine or go for the superstar play. Thank God he went for the routine play and it worked out.”

De La Cruz was wild early in the game, walking five through the first two innings. He regained his control, but Pittsburg still added two more runs in the top of the fourth with a two-out rally. Former Admiral Jordan Hinshaw singled and after a single by Rich Mejia, Nick Oddo doubled down the left field line to make it 3-1.

De La Cruz went six innings and give up just the three earned runs on seven hits. He also struck out three batters.

“I was definitely leaving the ball up early and it was all about making adjustments,” De La Cruz said. “After the second inning the walks went away and it was because I got my release point down at a better spot. But today it was all about our position players. They left it all out on the field and made some good plays behind me.”

Trailing 3-1 in the bottom of the ninth the Admirals finally showed some life with a rally off Diamonds’ sidearm reliever Garrett Granitz.

With one out, Wilfredo Petit was hit by a pitch and with two outs Jordan Hicks walked to put runners on first and second. This prompted Phillips to insert himself into the game as a pinch hitter. Despite hitting .368 last week, Phillips decided to take the day off initially. In the ninth, however, Phillips continued his torrid hitting by knocking a 3-2 pitch into right field, sending pinch runner Robert Brown home to make the score 3-2 and Hicks to third with the potential tying run.

“Honestly it was about giving other guys chances to play and show what they could bring to the table,” Phillips said. “When I came up to bat I had already faced (Granitz) before and I was going to stick to my approach (on hitting).”

The tying run was only 90 feet away, but Granitz got Baez to ground out to first to end the threat and the game.

The Admirals will continue their three-game series with the Diamonds Wednesday at Wilson Park. The game, being touted as “Winesday,” will feature $1 off Vino Godfather Wines. It was also have pre-game and in between inning entertainment from the Chon Renee Dance Academy Dancers. The Benicia Outlaws Little League team will also be honored as the team will throw out the first pitch.