PJ Phillips to Lead Admirals in 2017 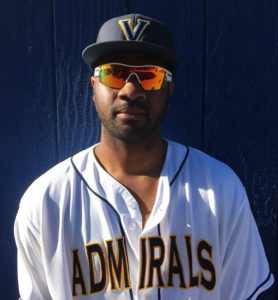 Charisma. Swag. Confidence. Whatever you call it, the Vallejo Admirals are sticking with a manager who has it – along with an accomplished minor-league resume as a player. The team has announced they will retain PJ Phillips who took over as player manager during the last two months of the 2016 season.

A second-round pick of the Angels in 2005, Phillips joined the Admirals early in the 2014 season before returning to the Atlantic League to finish out the year.

Phillips came back to the Admirals in 2015 and was the team’s leading hitter. He hit .302 with nine home runs and set the Pacific Association single-season record for doubles with 27. Phillips is a very respected member of the Admirals clubhouse, and commands the attention of his peers.

He took over the Admirals managerial duties on July 1st, and helped refocus the vets, and taught the rookies how to be pros. The team even rattled off a franchise record-tying, seven-game win streak at one point under his watch.

Admirals owner Kevin Reilly spoke about why he brought back the 30-year-old Phillips as manager for the 2017 season.

“We got good feedback from the players and front office about PJ’s leadership last year,” Reilly noted. “PJ is from a great baseball family with a dad who teaches baseball and a brother, Brandon Philips, playing second base for the Cincinnati Reds. With PJ able to prepare for the season and help form the roster this year, we expect he’ll be able to improve upon his results from last year.” 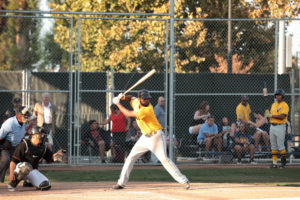 Phillips’ record-setting at bat for doubles in a Pac Assoc. season

Phillips spent seven seasons in the Angels system before playing in the Cincinnati Reds organization for two years. He then began his independent baseball career in 2013 with the Long Island Ducks where he won an Atlantic League Championship.

Phillips said his biggest reason for wanting to manage the Admirals again was to, “give guys a platform to compete and move up to a higher level, and of course to win a championship.”

Phillips added, “The first thing I like to implement is a winning culture, and to make sure guys are having fun playing baseball.”

As player-manager Phillips, drove in the winning run to get his first victory as a manager. He came up to the plate in a 4-4 game with the bases loaded and one out in the bottom of the 9th against Pittsburg, and hit a shot through the right side past a diving first baseman. It plated the runner from third for a 5-4 victory.

When asked if he would still play some this season, Phillips responded, “Yes, you will probably see me back on the diamond this year. For me personally, I’ve been in this league for some time now. I feel like I have unfinished business here to bring a championship to Vallejo and win a ring with the Admirals.” 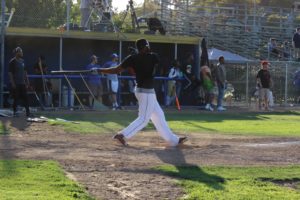 Phillips launches a dinger during the 2016 Home Run Derby

Phillips also put on quite a show during the Admirals home run derby last season, hitting 11 bombs in the semifinal round. He even gave tips on hitting and approach to eventual derby champion Cam Appling of Vallejo High, who out slugged everyone, including Phillips and Jose Canseco in the final “swing-off” round.

Announcements of Phillips’ coaching staff are expected in the coming weeks. The Pacific Association season is slated to begin on May 30th, with the schedule expected to be released by the end of February.

For more information subscribe to our newsletter using the form at the bottom of this page, or contact the Vallejo Admirals at info@vallejoadmirals.com or 707-641-1111.