SONOMA, Calif. — Brandon Phillips went 1-for-2 with an RBI and two runs scored in his Vallejo Admirals debut on Thursday at Arnold Field. Wilkyns Jimenez hit a home run in his debut for Vallejo. But it wasn’t enough as the Admirals fell to the first-place Stompers, 10-7.

Brandon Phillips is a 17-year major league veteran with more than 200 lifetime home runs and 200 stolen bases in the big leagues. He will make his home debut on Friday at Wilson Park when the Admirals host the Salina Stockade.

Jimenez, a 23-year old catcher from Venezuela who played for Martinez last year, also was added to the roster on Thursday. He blasted a home run to left in his first at bat for Vallejo.

However, it wasn’t enough as Sonoma jumped out to a 7-2 lead thanks to a six-run second inning. The frame was keyed by a grand slam home run by Dondrei Hubbard off of Jesse Remington.

The Admirals chipped away, cutting the lead to 7-6 on Brandon Phillips’ RBI-single in the sixth. But a three-run seventh gave Sonoma a cushion. Vallejo loaded the bases in the ninth but Jimenez hit into a double play to end it. 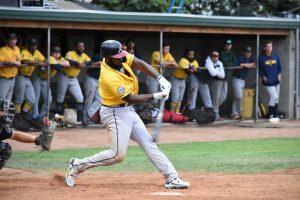