VALLEJO, Calif. — Brandon Phillips hit his first home run as an Admiral and Nick Akins Sr. homered three times but it wasn’t enough as the San Rafael Pacifics held on for a 13-12 win in a wild game at Wilson Park on Saturday.

Phillips hit his blast in the fifth inning. The two-run shot to left completed a 1-for-3 night for the longtime major leaguer. Phillips is now 4-for-10 in three games for Vallejo.

Akins came into the game with just two home runs on the season. The 2018 Pacific Association home run leader led off the second inning with a drive over the fence in left. He duplicated that leading off the fourth inning and hit another solo shot to left in the fifth. He added a sacrifice fly and a single and ended the night 4-for-4 with four RBI.

However, the Admirals fell behind 7-0 in the top of the second and were fighting uphill all night. John LaRossa, signed before the game, got the start and allowed seven runs in two innings of work. Alex Johnson had the big blow, hitting a three-run home run to right for his league-leading eighth home run of the year to key a six-run second.

The Admirals fought back from 7-0 and 9-3 deficits to make a game of it. However, every time Vallejo got close, the Pacifics would score to up the lead. Jailen Peguero closed it out for the save, though Tillman Pugh singled with one out and got to second representing the tying run.

The Admirals play at Napa on Sunday at 1:05 p.m. They return home on Wednesday, when they will host first place Sonoma at 6:35. On the Fourth of July, the Pacifics return to Wilson Park with a special 3:05 p.m. first pitch. For more information, go to vallejoadmirals.com or call 707-641-1111. 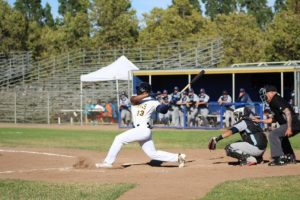