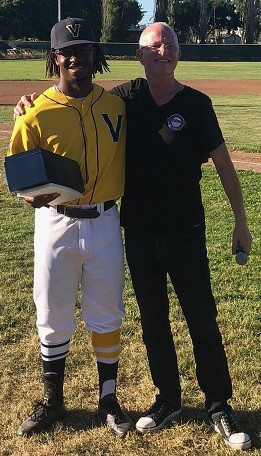 In the Admirals’ first eight games, Pugh has attained a .379 batting average and an on-base plus slugging percentage of 1.079 over 41 plate appearances. Those numbers mirror his league-best performance of a year ago: after his earlier stints with Vallejo in 2013 and 2014, Pugh returned in 2017 and batted .322, with a .991 OPS, 18 home runs and 58 runs batted in. His patrol of the Admirals defense as their center fielder, featuring tailback speed and a plus arm, has matched his offensive efficacy.

The night before the transaction between Vallejo and Ottawa became official, PacPro Commissioner Jonathan Stone presented Pugh with his MVP award before the Admirals’ home game at Wilson Park against the San Rafael Pacifics.“Tillman Pugh has served as the catalyst for the Admirals’ recent success, including our 2017 championship,” said Admirals assistant general manager Matt Snyder. “We’re very excited to see him move on to Ottawa. The Champions are one of the premier franchises in independent baseball, and we wish Tillman the very best.”

A native of Oakland, Calif., Pugh starred in baseball and football for national powerhouse De La Salle High School of Concord. Focusing on baseball after that, he played for Arizona State in 2008 and Phoenix’s Gateway Community College in 2009. The Seattle Mariners selected Pugh in the 16th round of the 2009 draft, but he opted not to sign. He redshirted for Sonoma State in 2010, then elected to sign with the New York Mets when he was chosen in the 15th round. Pugh spent the next three years in the Mets system, ascending as high as Single-A Savannah of the South Atlantic League. He also briefly played for Kannapolis of the Sally League in the 2012 season, within the Chicago White Sox chain.

Pugh’s independent baseball career began in 2013 with Gary of the American Association, when he also briefly played for the first-year Admirals franchise. He spent his first full season in a Vallejo uniform during the 2014 campaign. His next two years were split among Gary and fellow American Association club Winnipeg, and Schaumburg of the Frontier League.