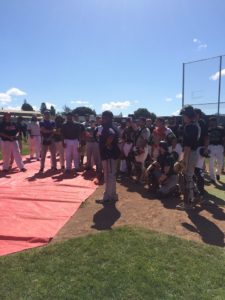 Vallejo, CA – The city of Vallejo played host to the largest tryout in Pacific Association history, as 108 players participated from all over the United States. Some prospects came as far away as Hawaii, Louisiana, Pennsylvania, Washington and Wisconsin.

The Admirals selected three players to invite to spring training, including two who have previously played for the team. Vallejo had the first pick amongst the four teams, and all three spring training invites have professional experience.

The first overall selection in the post-tryout draft was right-handed pitcher, Clayton Voechting, of Fountain Valley, CA, who played in the Pecos League in 2015. The 6’4″ Voechting attended Palomar Community College, before transferring in 2012 to Vanguard University in Costa Mesa, CA.

When asked for his thoughts on being selected by the Admirals, Voechting responded, “I want to thank Vallejo for the opportunity. This tryout was the start to many good things to come, and I am excited to get started.”

Erik Underwood of Reno, NV was the Admirals second selection on Sunday. Both he and his twin brother, Scott, were members of the Admirals inaugural opening day roster in 2013. 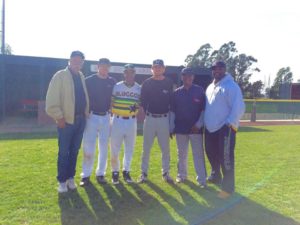 Underwood commented on the somewhat surreal nature of his selection by the Admirals, “Being back in Vallejo really brings back some fun memories from my first ever professional season, and I’m excited about the direction the organization is headed in.”

Underwood had a .342 on-base percentage in his 12 games as an Admiral in 2013, while driving in four runs and stealing 2 bases, and is a versatile corner defender.

Underwood put on the best power display of any prospect over the weekend, hitting three home runs and two doubles.

After playing in the Ranier League in 2015 before it ceased operations, Underwood said he’s, “Looking forward to competing to earn a roster spot, and being back in the city that started my pro baseball career.”

Underwood played at Yuba Community College before finishing his collegiate career at Jacksonville State University, where he hit .354 and .289 in his junior and senior seasons respectively.

Rounding out the group is San Diego Native, Anthony Williams, who was in Admirals camp in 2014, and finished the season on the active roster. In fact, you may recognize Anthony in our banner image and our schedule this season.

For Williams, the invite to the Admirals was exactly what he was hoping for, “I came up here just excited about the chance to get back to Vallejo. I really wanted to be an Admiral again,” Williams said.

Williams attended Yavapai Community College, D-1 Alcorn State, and NAIA Jarvis Christian College, and is a former draft pick of the Washington Nationals. Williams is also a very versatile defender who can play the middle infield and outfield, and adds speed on the base paths to any roster. 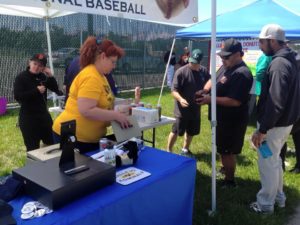 A good crowd of fans and family came out to CC Sabathia Field at Vallejo High to watch the tryout.

The Admirals had a successful test run of their hotdog roller straight out of Candlestick Park and Vallejo Great Donuts were a hit! There was even a family on vacation from Holland in the stands to take in the tryout

The three invitees will battle 40 others players for spots on the Admirals 22-man active roster when spring training starts on May 20th.