Sandford steals the show… and home vs. Sonoma 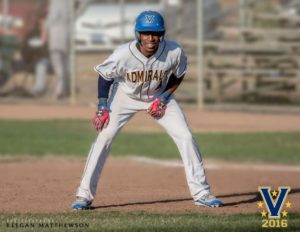 On Wednesday, he decided to surpass his own personal record.

Sandford had five steals against the Sonoma Stompers to up his season total to 74. His previous high was 71 in the Frontier League in 2012.

Oh yes, Sandford also had a 4-for-4 day at the plate, leading the Admirals past the Stompers 7-6 in the second game of a Pacific Assocation series at Wilson Park.

The Admirals trailed 6-5 but scored twice in the bottom of the sixth and then held on for the one-run win. Alian Silva tripled with one out and scored on Sandford’s RBI single. Sandford stole second and eventually scored on Pedro Perez’s sacrifice fly.

Perez was 2-for-3 and knocked in three runs.

The Admirals took a 4-0 lead in the second against Stompers starting pitcher Taylor Thurber. Sandford and Perez both had two-run singles in the inning.

Vallejo scored once in the fourth as Sandford singled and advanced to third on a wild pick-off attempt. He then stole home with Joe Hicks at the plate when Sonoma catcher Mason Morioka softly threw the ball back to the pitcher.

The Stompers (39-29, 16-13) scored two in the fourth, three in the fifth and one in the sixth to lead 6-5. Daniel Baptista singled home Matt Hibbert for the go-ahead run.

From there, the Admirals’ bullpen shut down Sonoma. Mario Mendoza picked up the win as he went two innings, allowing two hits and one run. Wendell Floranus was dominant in the final two innings, not allowing a hit and striking out four. He completed a 1-2-3 ninth by striking out Hurley for his second save.

Vallejo (29-39, 14-15) could not pick up ground on first-place San Rafael in the second half standings as the Pacifics blew out the Pittsburg Diamonds. The Admirals are three back with 10 games to go in the regular season.

The Admirals and Stompers conclude the series at 6:35 p.m. on Thursday before Vallejo hits the road to play Pittsburg.