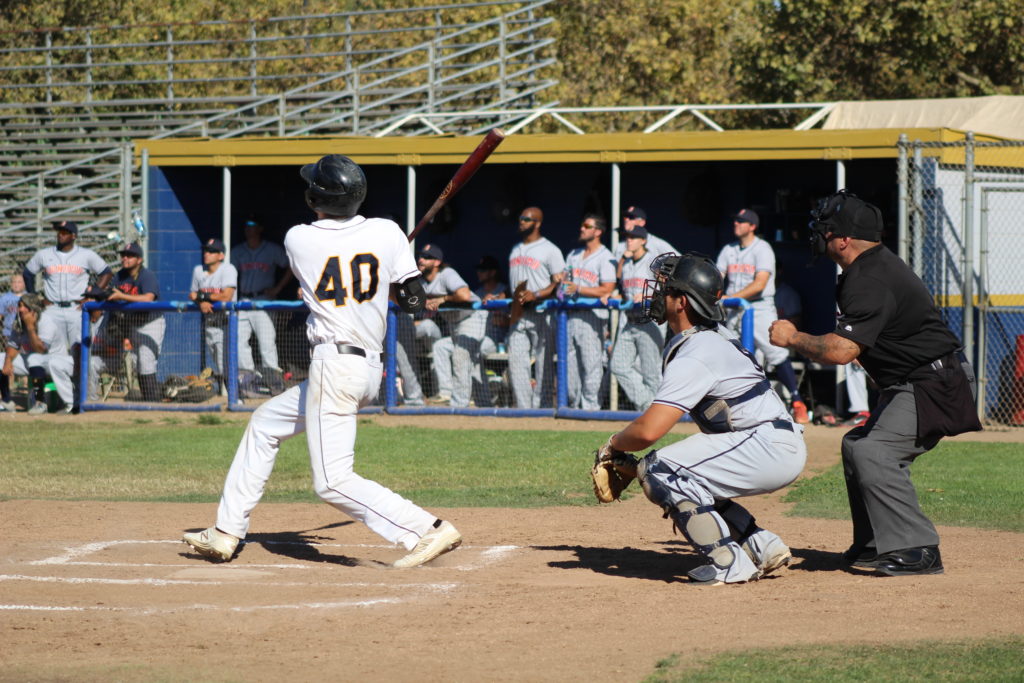 The Vallejo Admirals may still win the second half championship of the Pacific Association, but one thing is now for certain — the Sonoma Stompers aren’t going to let Vallejo do it at Wilson Park.

In front of 217 loud and rowdy fans, a few of them banging away loudly on cowbells, the Stompers slowed down the Admirals’ with a 9-5 win on Saturday. The win puts the Stompers (48-26, 20-15), the first-half champions, only a game out of first and eliminates any chance of Vallejo clinching on Sunday afternoon. A win Sunday does reduce their magic number to one.

Vallejo first baseman Graylin Derke, who had three hits in Saturday’s contest, said the team will be ready on Sunday.

“Honestly I think all of us are already there and looking past this one,” Derke said. “We’re not worried. We know we are the best baseball team in this league and to beat us you have to play very well and they (the Stompers) did today. But we’ll be ready tomorrow.”

Vallejo manager P.J. Phillips also is optimistic about taking the series. Vallejo won the first game of the series on Friday, 13-8.

“We’ve been playing very well the last two or three weeks,” Phillips said. “I’m not concerned. We’re going to keep grinding and if we can hold a team to four or five runs we should be OK.”

Unfortunately for Vallejo (33-41 21-14), there was no chance of holding Sonoma to under four runs after the second inning. In that frame the Stompers hit a pair of two-run homers, one by Brennan Metzger and the other by Daniel Comstock, to give Sonoma a 4-0 lead.

Down, but not out, Vallejo came back. In the bottom of the second Derke hit a home run of his own, a solo shot to right field that made it 4-1.

“I wasn’t looking for a certain pitch, more for a pitch in a zone,” Derke said. “He threw it in the zone and I hit really hard.”

In the bottom of the third Vallejo added three more runs to tie the game at 4-4. Quintin Rohrbaugh led off the inning with a single and after an error and a walk the bases were loaded. Nick Akins came up to bat, fresh off serving his two-game suspension for his role in the Wednesday scuffle with Pittsburg Diamonds’ pitcher Travis Blackley. Akins delivered with a solid RBI single to left and the lead was cut to 4-2. Moments later Derke was at it again offensively with a big hit, this time a two-run single to center to make it 4-4.

The Stompers took a 5-4 lead in the fourth inning when they scored on a wild pitch by starting pitcher Brent Adheen.

The Admirals once again tied the game in the bottom of the fourth, this time on a solo homer by No. 9 hitter Rohrbaugh with a blast to left center that made the score 5-5.

“We have a lot of confidence when we are trailing in a game,” Derke said. “We believe in our offense, defense and pitching. The one thing about our offense is everyone is explosive. Everyone has power and can go deep. There’s really no holes in our lineup and you can’t really pitch around anyone in it.”

The Stompers weren’t done with the long ball, however, as Metzger homered again, this time a towering shot to right field in the fifth inning that made the score 6-5. Metzger finished with two hits and a walk to go with his three RBIs.

Down by a run, Vallejo reliever Alex Fishberg suffered control problems in the top of the sixth as he walked four straight batters with two outs. Sonoma made it 7-5 when Scott David had the fourth consecutive free pass that plated Matt Hibbert.

Sonoma starter Scott Plaza gave up 11 hits to the Admirals, but Vallejo could only score the five runs off the right-hander before he left after seven innings.

In the eighth the Stompers added some insurance with two runs. Matt LoCoco hit a sinking line drive that a diving Tillman Pugh couldn’t quite grab in center. The ball rolled all the way to the wall for a triple and moments later Hibbert drove him home with a single up the middle to make it 8-5. The Stompers scored another run on a rare error by David Kiriakos and the lead was 9-5 for Sonoma, which eventually became the final. D.J. Sharabi pitched two scoreless innings for the Stompers to seal the victory.

Despite the loss, Phillips was excited to see a lot of fans come out to Wilson Park on Saturday and fever or not, he and the Admirals hope the fans bring more cowbells on Sunday as starter Melvin Morel takes the mound for Vallejo.

“Man it feels good to see all the people from Vallejo and all over come out,” Phillips said, with a big grin. “Hopefully they can come out tomorrow and we can throw some more strikes and get a win. I do appreciate all the fans though.”

Pittburg and San Rafael, in third and fourth-place respectively, have been elimintated.

After Sunday’s game, Vallejo travels to San Rafael for a three-game series starting Tuesday, while Sonoma visits Pittsburg to conclude the regular season.