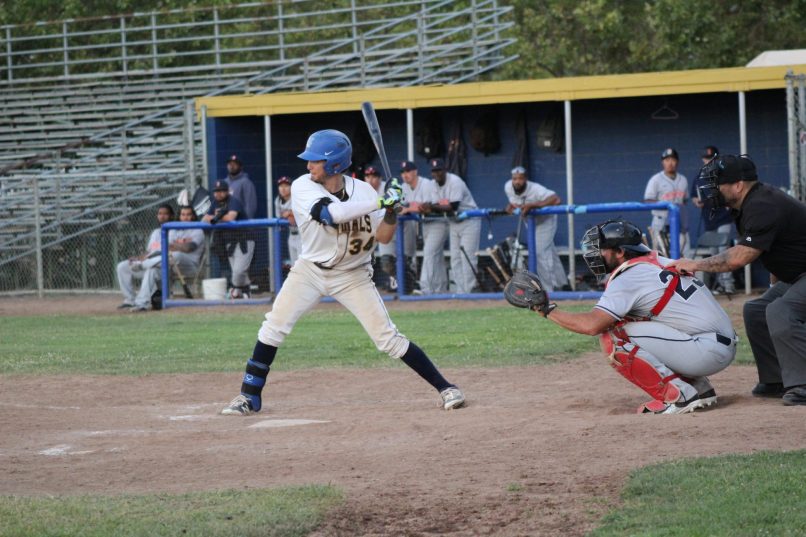 VALLEJO, Calif. – The Admirals were swept for the second consecutive series by the Sonoma Stompers after falling 8-4 in the series finale Thursday night at Wilson Park. Vallejo has now dropped eight of nine games overall this season versus Sonoma and slips to 5-13, while the Stompers improved to 14-4 and now lead the Admirals by nine games in the Pacific Association.

After the Stompers took a 2-0 lead early, Admirals designated hitter Nick Akins drilled his seventh home run of the season in the fourth to cut the deficit in half.

Marcus Bradley and Eddie Mora-Loera came in to score for the Stompers in the seventh, extending the lead to 8-1.

Vallejo managed three runs in the eighth after an RBI double by Pedro Perez (pictured above) brought in Vladimir Gomez, Tillman Pugh drove in Perez with a single and after a stolen base and fly-out by Chevy Chase, Pugh scored on a sacrifice fly by Shawn Payne. It was as close as the Admirals would get, as Gerald Bautista doubled in the ninth but was stranded after Perez struck out.

Sonoma starter Juan Espinosa improved to 2-0 this season, twirling a two-hitter and striking out seven in a dominant effort. At one point, Espinosa retired nine consecutive Admirals from the fifth through the seventh innings.

NOTES: Admirals outfielder Chevy Clarke had his 14-game hit streak and 17-game on-base streak snapped after going 0-for-4 on Thursday night … Akins’ seventh home run of the season leads the Pacific Association … Graylin Derke extended his hit streak to three games after an 0-for-23 slump that lasted over a week … Shawn Payne had his nine-game hit streak ended on Thursday night after going 0-for-3.