For three seasons now the Pacific Association of Professional Baseball Clubs has given out league awards for its top performers. Today the top fielders at each position were announced, and for the second time in three seasons the Admirals have multiple winners for their defensive efforts.

Moseby was voted the best fielder on the Admirals by teammates at the end of the season. The 6’6” first baseman was known for his ability to stretch for throws at first base, often going into a full split to make the grab. 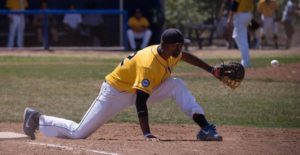 “It’s an honor to be named the best defensive first baseman in the Pacific Association,” Moseby replied when asked his reaction to winning the award. “To be even considered for this award is truly a blessing. I’m honestly pretty surprised about winning the award considering the extreme amount of talent in this league, but I definitely do work hard at my craft and am happy that I am being awarded this honor.”

The second-year Admiral is the son of former Toronto Blue Jay and Detroit Tiger Lloyd Moseby, and also had a good season at the plate, finishing second in doubles on the team and tied for the team lead in triples.

“I just want to thank my father for instilling good work habits in me and teaching me to never give up,” Moseby said. “I also want to thank the Vallejo Admirals for giving me the opportunity to go out there every day and play this great sport, and hopefully I’ll be able to continue to contribute to this great organization for years to come.”

Gerald Bautista manned the Admirals hot corner for the majority of the 2016 season. He had a knack for making difficult plays look routine. He played a few different positions to begin the year for the Admirals, including the corner outfield spots and a couple of turns at second base. 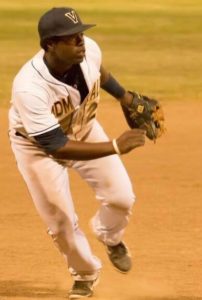 The Cleveland Indians organization even tried him out at catcher during his second season of professional baseball. “It didn’t work out,” Bautista said with a chuckle.

Third base is where the son of former big leaguer Danny Bautista settled in, and there was really no one even close to his level at third. He reacts quickly with the glove, has a smooth throwing motion and never panicked or rushed a throw.

“I want to thank God, my family, friends, teammates and the fans for supporting me through my career,” Bautista said after learned he won the award. “I would like to thank the coaches and the Admirals front office for giving me the chance to play. I feel honored to win the best defensive third baseman in the league. It means a lot.”

Bautista is also a nominee for the league MVP award. The former Cleveland Indians minor leaguer hit .302 with four home runs and finished second on the team with 38 RBIs, despite missing the final two weeks of the season due to an injured wrist.

Admirals right fielder Tim Williams is a high-energy player who would fearlessly crash into the wall to track down a deep drive. Along with that all-out effort, Williams has the tools for any outfield spot. He has the speed of a centerfielder and the arm of a right fielder. He even lead the team in home runs like a powerful corner outfielder should. 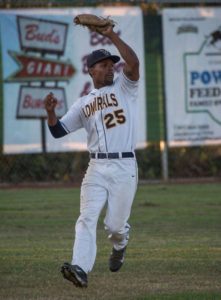 Early in the season Williams gunned down runners at home and third base, and that arm in right deterred runners from trying to take the extra base as the season went on. He had a similar reaction to his first baseman, Moseby, when he learned he was voted the best right fielder in the league.

“I’m surprised,” Williams said with a laugh after learning the news. “I made a few errors at the beginning of the year that I thought I’d have no chance to even be considered.

“However, I am thankful, and I want to thank God, my family and those who made the decision to even consider me. I would have never thought I’d win something like this, but I’m not surprised only due to the fact I put a lot of work in off-season defensively, offensively and mentally.”

Three members of each franchise voted for the winners of the Pacific Association Awards. Each team’s manager, media director, and general manager voted on the league’s awards.

The Admirals have nominees for the Pacific Association’s Rookie of the Year Award as well, which will be announced this Wednesday, October 26th. Three Admirals are up for that honor, including pitcher Marquis Hutchinson, catcher Cyle Figueroa, and second baseman Alian Silva.