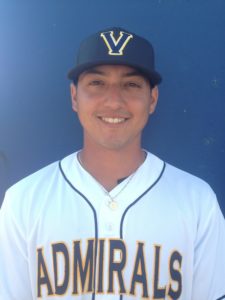 The Vallejo Admirals jumped on the San Rafael Pacifics early and then held on for a 7-5 win to claim a Pacific Association series at Albert Park.

Roman Gomez tossed 7 2/3 strong innings, allowing four runs, only two which were earned. He struck out four and walked three.

Gerald Bautista was 2-for-5 with three RBIs, two coming on a two-run single in a three-run seventh and another coming on a single in the eighth. Jackson Valera was 3-for-5 and is hitting .500 12 games into the year.

In the second, Raul Navarro singled in Valera, Lydell Moseby knocked in Wilfredo Petit and Darian Sandford had a sacrifice fly to drive in Navarro against losing pitcher Brandon Warner

Petit had an RBI on a fielder’s choice to drive in Bautista in the seventh.

Navarro and Gadiel Baez also had two hits for the Admirals (6-6), who are at Pittsburg on Tuesday to begin a three-game series.