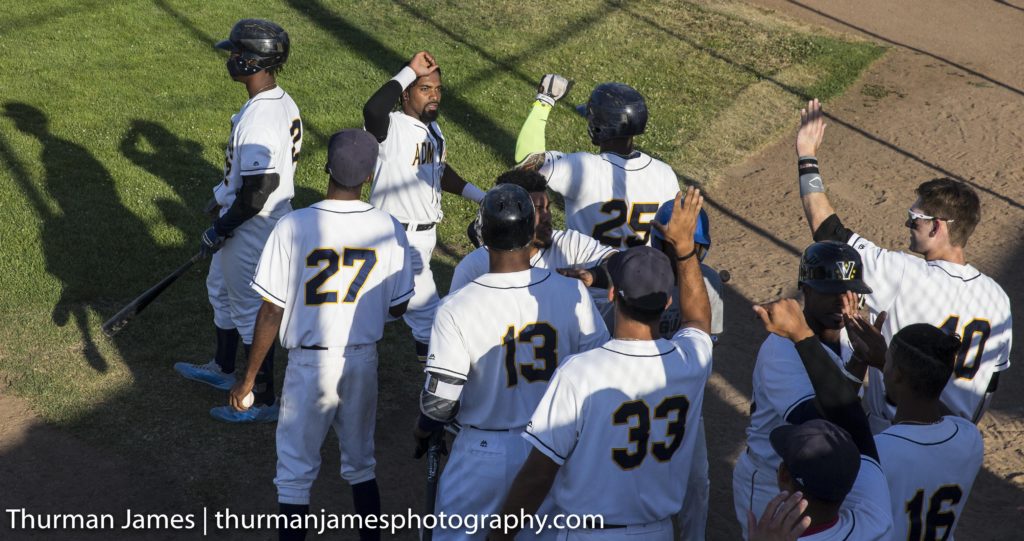 In the top of the fourth, a tortoise made its way down the third-base line toward home plate in conjunction with “Critter Night” at Wilson Park.

There was a “shelling” in the second game of the Pacific Association series on Saturday evening in more ways than one.

Vallejo scored nine times in the fourth inning against Mike Jackson Jr. and then held on to beat the Sonoma Stompers 14-10 to even the series at a game apiece.

Behind a 16-hit attack, the Admirals (8-18) had one of their best offensive nights in weeks and snapped the first-place Stompers’ (20-6) seven-game winning streak against them.

“I’ve just gotten here but anytime we win, it’s big,” said shortstop Chris Fornaci, who reached base five times. “It’s always a huge morale boost. Morale has been good here. The guys have been great. We’re all working really hard to turn it around.”

Speaking of turnaround, it was a major one for Admirals starting pitcher David Dinelli (1-1), who was shelled for six runs and 12 hits against Pittsburg on June 25. This time, the right-hander worked 6 2/3 strong innings, allowing just five hits and three runs to the league’s most explosive offensive team.

“I was dealing with a little bit of an issue on my side so I went in and did a lot of treatment this week and was feeling right,” Dinelli said. “Everything felt smooth and relaxed today.”

The Admirals fell behind 1-0 but quickly erased that deficit with a three-run second to lead 3-1. Fornaci and Deybi Garcia both singled to lead off the inning and Gerald Bautista singled up the middle to knock in Fornaci. Vladimir Gomez followed with a drag bunt single down the third-base line to load the bases. After one out, right fielder Chevy Clarke (3-for-4) clubbed an opposite-field double off the wall in right to score Garcia and Bautista.

Vallejo tacked on one more in the fourth on Garcia’s RBI single to lead 4-1 and then sent 13 batters to the plate in the fourth to break the game open.

Derke had a bad-hob single fly over the head of second baseman Yuki Yasuda to start the rally and Fornaci lined a two-run single to left for the 6-1 lead. Garcia and Bautista followed with run-scoring singles before Gomez unloaded over the left-field wall for a three-run homer and chase Jackson (1-1), who allowed 12 runs (11 earned) in three-plus innings. Derke’s groundout scored Clarke for the ninth run of the inning. That came against reliever Jacob Cox.
Advertisement
The Stompers scored two against Dinelli in the seventh before reliever Tim Holmes got the final out with the bases loaded to end that threat. Sonoma, however, then scored three more in the eighth and three more in the ninth against Holmes. A three-run homer from Daniel Comstock made it 14-9.

With Peter Reyes in to try and end it, Sonoma added one more on a Yasuda RBI single before Reyes struck out Kelsie Whitmore to end the game.

With Andrew Rubalcava on the disabled list, Dinelli said he is starting to develop a rapport with Garcia, who backed up Rubalcava earlier in the season. Garcia had three hits at the plate, pushing his average to .290.

“Anytime you have a new catcher, it takes a little time to start to feed off each other,” Dinelli said. “Now I feel like we’re kind of locked in with a groove. We’re thinking the same way. We know what pitches to go and how to attack hitters together.”

Dinelli laughed as he had to wait for his warm-up pitches as the tortoise methodically made its way to home plate to the delight of the crowd.

“That was definitely a first,” he said. “That was fun though. You have to have fun with it.”

Notes: Admirals manager P.J. Phillips’ brother Brandon attended the game and sat near the Admirals dugout. Brandon Phillips is in the Bay Area with Atlanta Braves playing the Oakland A’s. … Derke had two RBIs, giving him 26 on the season, which is second in the Pacific Association and tops on the team. … Gomez’s three-run shot was his third of the season. Tillman Pugh’s solo homer in the eighth was his fourth.