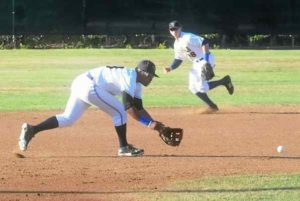 The Vallejo Admirals seem to know how to win these rubber matches against the San Rafael Pacifics.

Now Vallejo just has to bounce back against the rest of the Pacific Association.

The Admirals beat the Pacifics for the fourth straight series after a 9-4 victory on Thursday at Wilson Park.

Vallejo pounded out 16 hits against three San Rafael pitchers. The Pacifics (18-15) certainly helped guide their Highway 37 rivals in the right direction with three errors and a misplayed ball in the lights by right fielder Maikel Jova.

“We just want to come out and we want to win,” said Admirals right fielder Tim Williams, who was 4-for-5. “Ever since we had a coaching (change), we just told ourselves that despite all that, we are a team and that’s something that’s going to stick. It doesn’t really matter who we play. We are just trying to give our hardest and play as hard as we can.”

Williams was referring to last Friday’s managerial change as the team replaced Mike Samuels with player-coach P.J. Phillips. While Phillips was 0-for-4 at the plate as the designated hitter, he seemed to push all the right buttons on the coaching front.

“It’s definitely something I’ve worked on during the bullpen session in between starts,” De La Cruz said. “I think it’s just not thinking too much and letting the work pay off. That’s all I did there. I tried not to overthink or overthrow and it worked out. Thank God.”

The Admirals scored two quick runs in the first as Williams led off the inning with a broken-bat single to center and scored when San Rafael pitcher Celson Polanco threw away Darian Sandford’s bunt.

Sandford motored to third on the play and scored on Gerald Bautista’s ground ball.

Sandford showed off his speed again in the third as he walked, stole second, moved to third on catcher Ricky Gingras’ throwing error and scored on Bautista’s sacrifice fly.

“The dude is either going to bunt or get a ball on the ground, which gives me an opportunity to get around the bases,” Williams said. “I mean, he’s as fast as lightning. I don’t know another guy other than Dee Gordon who runs like that. It’s really fun when he gets on base and then it just goes from there.”

Vallejo made it 4-0 in the second as Aaron Brill and Lydell Moseby singled to lead off the inning. Brill scored on Alian Silva ground ball and Moseby scored on Williams’ RBI single.

San Rafael made it 4-3 with a three-run third against De La Cruz but Vallejo added a single run in the third, three in the sixth and one in the seventh to lead 9-3.

The three-run sixth chased Polanco from the game. Silva and Williams had back-to-back RBI singles to highlight the rally.

Admirals catcher Wilfredo Petit and shortstop Aaron Brill were both 3-for-4. Bautista, Moseby and Silva all had two hits.

Williams and Petit hooked up for one of the defensive plays of the game in the seventh as reliever Luis Ferreras struck out Kyle Adie but the ball got past Petit.

Petit tried to throw Adie out at first but he nailed the runner with the throw instead. The ball caromed off into the outfield where Williams, the right fielder, threw out Johnny Bekakis trying to score. Petit made the tag as he was sprawled out across home plate.