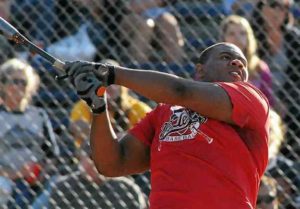 There were college players and seasoned professional baseball players. There was even a former American League MVP.

They all would have been good bets to win the Vallejo Admirals’ first Home Run Derby at Wilson Park on Thursday.

Nope. The winner was 16-year-old Cameron Appling, about to become a junior at Vallejo High School.

Appling, swinging like David Ortiz, crushed seven homers in the opening round, six more in the semifinals and two in the finals to claim the exhibition in front of a huge throng at Wilson Park. The event took place before the Admirals and Pittsburg Diamonds’ series finale.

“I was pretty confident,” Appling said. “I worked out yesterday and hit seven (out) but I was tired. I had just come back from work and from football practice.”

Appling could be a busy guy again for the Redhawks. He is expected to play varsity football, basketball and baseball this coming school year.

“Cameron is a really good kid,” said Vallejo athletic director and baseball coach Josh Ramos. “He has really come a long way from ninth grade until now. He’s put in a lot of hard work and a lot of time in the cage and baseball is one of those sports where you can’t just roll out of bed and be good at it.”

Benicia High grad Caleb Van Blake, who now attends UC Davis, had six in the opening round and eight in the semifinals to advance to the championship round with Appling. American Canyon’s Armando Bendana and Benicia’s Steve Urias were the other two players to move on from the first round.

All of those players were left-handed hitters, which might have helped at Wilson Park where the ball tends to travel well to right field but die going to left.

Former A’s slugger Jose Canseco certainly found that out. Canseco hit just three in the semifinals and one more in the finals. Canseco certainly helped with the crowd, however, as many in the stands wore A’s jerseys representing the 1980s and 1990s when the slugger starred in Oakland. The Wilson Park parking lot was overflowing for the first time in many years.

Admirals player-manager P.J. Phillips, a right-handed hitter, put on a nice display in the semifinals with 10 homers.

Appling said Phillips gave him some good advice about hitting in the derby.

“He told me to keep my eye on the ball, swing at my pitches and swing hard,” he said.

Appling got to meet not only Canseco but Diamonds field manager Aaron Miles, the ex-big leaguer.

Maybe most of all, Appling began to relax once he hit a few balls out of the yard.

“Once I felt it off the bat, I think I calmed down and got my groove on,” he said.

Appling has had a very good summer. He starred for the 16- to 19-year-old Vallejo Senior Babe Ruth all-star baseball team that advanced to the Northern California Southwest regional tournament in Bakersfield.

Appling plays tight end and linebacker in his second varsity season for the football team. The Redhawks open the season Aug. 26 at Armijo.

Ramos said he is looking forward to seeing what is in store for Appling in the next two years.

“He always has a really big smile and every time you see him, he is a bundle of joy,” Ramos said.