Winning streak up to five games with win over Pittsburg Diamonds 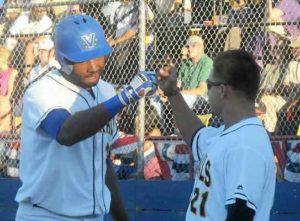 In the seventh inning, the Vallejo Admirals played “Ladies Night,” the iconic 1970s classic by Kool and the Gang.

In the end, the Admirals won their season-high fifth straight game, outlasting the Diamonds 8-7 in a 4 1/2-hour marathon at Wilson Park.

Vallejo scored the winning run in the eighth when Pittsburg reliever Jeff Lyons walked Darian Sandford with the bases loaded, forcing in Wilfredo Petit from third base.

Admirals closer Josh Evans survived a one-out, bases-loaded mess in the bottom of the ninth by striking out Tyler Nordgren and Nick Oddo to end the game.

Oddo tied the game 7-7 in the sixth with a bases-clearing double and had reached base five times before the at-bat in the ninth.

“He had been swinging the bat hot and it was a bases-loaded situation with two outs and my main focus was to go after him and get the out,” Evans said. “I just tried to find the zone and get ahead and good things happen. … I just made a good pitch and got him.”

The Admirals squandered excellent scoring opportunities to take the lead in the sixth and seventh innings, leaving the potential go-ahead run at third base both times.

Still, it was another gut-check win for a team playing its best baseball of the season.

“Even when we were losing games, we had all of the belief in the world in ourselves,” said Admirals second baseman Aaron Brill. “It was just a matter of time before things went our way. We just stayed positive and kept our heads up. Things are now going how we believe they can.”

Brill had an interesting night.

A mental error in the top of the fourth allowed an extra Pittsburg runner to reach and the Diamonds eventually grabbed a 4-2 lead.

Then in the fifth with runners at first and second, Brill was asked to lay down a sacrifice. Twice, he failed.

However, with a 2 and 2 count he made up for his earlier misdeeds, crushing a double to left-center to tie the game. The Admirals scored five runs in the inning to take a 7-4 lead.

“Being in the 9-hole with no outs late in the game, I definitely need to be able to get that down but I believe in my team and everyone picking us up,” Brill said. “I’m glad it worked out that way.”
Sandford was also a big part of that inning as his steal of second base drew a throw from Nordgren, the catcher, as the ball sailed into center field. That allowed Brill to score the go-ahead run as the Admirals led 5-4.

P.J. Phillips knocked in Sandford with a single and Phillips scored on a ground ball from Tim Williams to complete the rally.

But the Diamonds answered in the sixth as Oddo’s bases-clearing double against reliever Mario Mendoza tied the game 7-7.

Vallejo starter David Dinelli left with two outs in the sixth and a 7-4 lead but all three of his runners scored on Oddo’s hit.

The Admirals are not known for their power. However, with the temperature in the 80s at game time, Williams and Lydell Moseby took advantage of the conditions with long home runs to left field earlier in the game against Diamonds starter Marquis Pettis.

Pittsburg (25-27) took a 2-0 lead in the second as Thomas Shull’s bad-hop triple went past Sandford, the center fielder, to score John Contreras. One batter later, David Kiriakos lofted a sacrifice fly to right to score Shull.

Williams’ blast in the bottom half of the inning cut the lead to 2-1 and Moseby led off the third with his homer to tie the game 2-2.

With the win, the Admirals (21-31 overall) are 6-7 in the second half of the Pacific Association slate, just two games back of first place.

“We’re all on the same page now,” Evans said. “Our hitters are swinging it, we are playing good defense and we’re pitching. You put those three things together and good things happen.”

Notes: Five former Admirals played for the Diamonds in the contest. … Sandford stole his league-leading 39th base. … The Admirals hit into four double plays.